Just over a year ago we were playing in Latvia for the very first time, in the eastern city of Rēzekne. Our return to these forested flatlands, this time in the western town of Tukums, was nothing short of triumphant.

We arrived around midnight at a guest house just outside of the quiet town centre, to witness a choir rehearsal taking place in the warmly-lit dining room. We peered through the window from the darkness outside to see a handful of men and women sitting around a table, casually sipping from beer bottles in between bursts of harmony. That’s the way to do it, I thought. In the morning I was awoken by the sound of loud voices and vivacious accordion coming from the carpark. I looked out to see a small group of middle-aged locals gathered around a car, singing. Smirking at the dream-like, idyllic nature of it all, I soon fell back to sleep for a short while, before waking up again to find no music nor people, nor was I able to describe the morning’s events to my sleepy roommate with any level of sincerity.

After an early morning soundcheck on stage to an empty field, the late gig schedule on the Saturday night allowed time to explore throughout the day. After a hearty lunch in what appeared to be Dumbledore’s office, we meandered through the bustling market streets of the town centre – rarely this busy, said our local host, who had obviously spent the last twenty-something years wandering through a ghost town, asking, ‘Where is everybody?’. It seemed they had all finally emerged from their hiding places to bask in the weekend sunshine and enjoy the Rose Festival, a celebration of the town’s rose-growing heritage. The number of roses seemed a little underwhelming, but it was a small place after all, and I admit that as clown-whited LED drummers we’re not exactly at home with subtlety.

Our quiet and kind hosts – a young, alternative couple who volunteer in the town’s community arts projects – took us first to their workplace, a hub of creativity known as The Nest, where we found a large upstairs room filled with handmade jewellery, puppets, dolls and paintings. One of our drummers got a little too involved in his own drawings just as a gaggle of elderly tourists arrived at the door and proceeded to watch him in intense wonderment. Soon after, we were led down Art Street, along rows of paintings and pagan-style costumes, lining the edge of one of many striking Lutheran churches scattered around the town. When I asked one of our new friends if Latvia is a particularly Christian country, she responded with confident but polite defiance, ‘I think most people would identify with being Pagan. Yes, mostly Pagan.’ I didn’t want to be a Wikipedia-fact-chasing buzz-kill, so gently left the topic there.

Leaving a mark on the place

Various handmade delights at The Nest 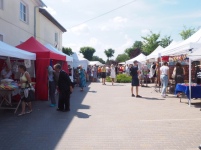 It wasn’t long before the hot July sun caused us to seek out the shade, at which point our hosts suggested taking us somewhere to cool down. We were intrigued. We stopped off briefly at the hotel to collect our swimming gear, and were soon being driven through a thick pine forest a few miles outside the town. The bus eventually pulled up at the end of the track in a huge clearing where there was a beautiful, shimmering lake. At last, it was as if we had arrived in our natural habitat. 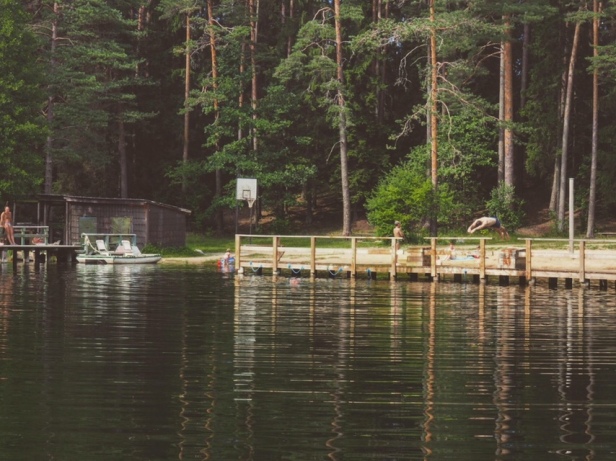 After a long, peaceful swim in still waters that we then disrupted with watersports to rival all six-year-olds, we took a walk deeper into the forest to find a natural spring. We descended into a small pit at the top end of the stream, filling up our bottles with the freshest, purest water I’ve ever tasted. We decided it was a fountain of youth, of immortality, nectar of the gods. What we didn’t notice were the thousands of mosquitos silently banqueting on our pale legs as we obliviously chuckled away.

The day had been tiring, for no better reason than we’d got overly excited about water in its various forms, and by 11PM we were mustering up another burst of energy for the first show. The stage show went well, but it was the next one we were looking forward to the most. Making our way up a long road – seemingly the only hill in Tukums – at 1AM, once again it looked as though everybody had gone home. We walked for what felt like miles towards the main square before seeing a single soul, worrying that our street show – the point of which was to ‘get among the people’ – might be played to no one. And then suddenly, a few roses came into sight, and with them a huge crowd of people, waiting patiently for the event’s finale to begin. Never has an audience looked so overjoyed to see us – after all, they’d been drinking all night for this moment, whether they knew it or not. As we drummed and danced through the raving crowds of merry-makers, breaking the silence of the day, our energy was completely renewed. Tukums was another place at night time, and it knew how to party.

On the way back to our dressing room, festival-goers danced and stumbled around us, and we casually knocked out a bossa or two to keep them at bay. Arriving back at the park behind the main stage, one final opportunity to act our shoe size presented itself and thus a new, purely self-indulgent show, ‘LED Drummers on Swings’, was born.

Around 3AM, after packing down and returning to our usual barefaced selves, we rushed into the crowd in front of the main stage for one last dance before it was all over. Above the din of DJs and dodgy live percussion racks, a girl shouted into my ear, ‘WHERE ARE YOU FROM?’
I shouted back, ‘THE U.K.,’ to which she replied, presumably rhetorically, ‘THEN WHY ARE YOU HERE?’
She might have thought that nobody would want to come to her small town on a whim, yet here we were, travelling around as usual, having just had the best weekend in recent memory. Latvia remains mostly flat and quiet, but is still brimming with surprises.