‘We don’t really celebrate Christmas,’ she said, as we observed a stage full of jolly Santas dancing along to Wham’s Last Christmas, ‘it’s really only for the Orthodox Christians.’

Russians may, or may not, celebrate Christmas, but one thing they definitely do celebrate in all its glory is the arrival of the New Year. Celebrations in Moscow last for a whole week, and the futuristic space-themed street party that dominated the city centre to welcome in 2020 went above and beyond any of our expectations. Despite the blistering cold (though nowhere near the -20 it once was), the streets were filled with people at all times, wrapped up in impressive fur hats and coats, wholeheartedly committed to the party: one of the most consistently brilliant crowds we’ve ever played to. If I could play another 12 long shows in minus degrees celsius to those same beaming kids and be squeezed by more cheerful giggling old ladies, I’d do it in a heartbeat.

A sprinkling of snow outside the hotel to get things started 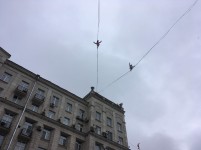 Above the performance space 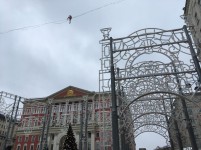 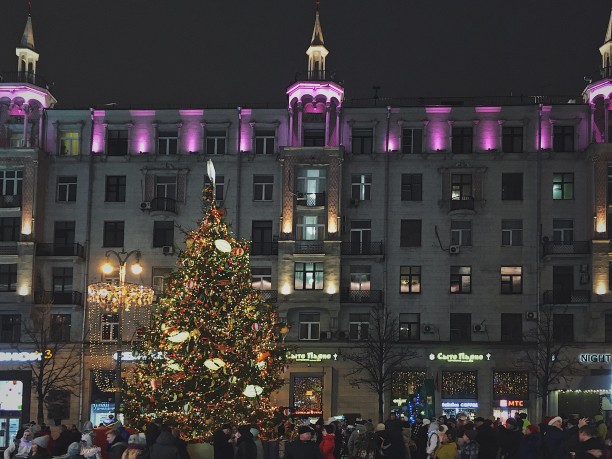 The street where we performed for 4 days

Of course, things weren’t so rosy the entire time. They can’t be. When we arrived at Moscow passport control a man in uniform impatiently shouted directions at me and then a woman knocked loudly on the glass booth and shouted ‘Look at me!’ in an apparent fit of rage that dissipated as suddenly as it had appeared; I spent the next hour or so unruffling my hat and my crippled emotions. Politeness was different here; that, I very quickly understood.

We were relieved, then, to turn the corner on the other side of the baggage belt, to be met with the open arms and enthusiastic smiles of our young hosts, who couldn’t have been more accommodating if they’d tried. Any sense of the unsmiling Russian stereotype (see https://theculturetrip.com/europe/russia/articles/15-stereotypes-every-russian-hates/) was immediately dissolved and a sense of calm resumed. Over the next few days of intense performances and spontaneous tours of Moscow’s metro stations, our primary chaperone, a tiny gymnast with long dark hair, blue eyes and a beaming smile – Maria – would become a good friend, key to making the entire experience (or at least the bits without vodka) unforgettable. 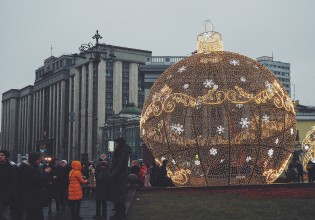 Moscow is a city of grand proportions. Looking around, it seemed like every building came from a different architectural era in Europe and Asia, and each was puffing out its chest further than the last, keen to get all of the attention for its impressive grandiosity. At this time of year the city is also decorated from head to toe in Christm… sorry, New Year decorations, such as humongous bauble-covered trees, fairy lights and reindeer. Meanwhile, inside the buildings are a large number of souvenir shops where ABBA is playing like it’s going out of fashion (don’t tell me it really is) and the faces of Putin and Stalin stare back at awkward tourists from every T-shirt and fridge magnet; tourists who are still trying to work out if this is ironic or not.

You think that’s a lot of Russian dolls? Just think of how many you can’t see for crying out loud 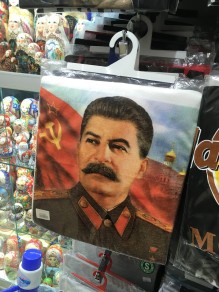 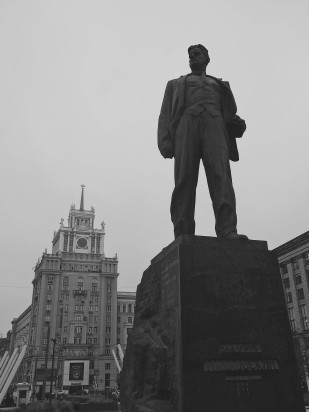 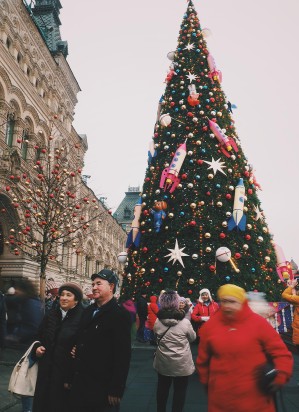 Getting around Moscow, especially during a national holiday when the rush hour crowds subside, is a genuine delight, given that the underground metro stations look like majestic museums. Maria took us on a tour of the best ones: we would travel a few stops, alight the train just to look around the station, and then hop straight onto the next one. Imagine doing that in Tyne and Wear…

Getting around in taxis was less awe-inspiring but no less bizarre. One day we got into a taxi to find the driver had a whole television set-up in the front, and was laughing loudly along to a brightly-lit comedic Russian talk show while simultaneously weaving his way through inner-city traffic. When he proceeded to answer his phone we finally plucked up the courage to interject; after all, nobody could be that good a multi-tasker. Since the driver spoke very little English and we had no Russian language skills to speak of, we turned to Google Translate: from that moment a conversation ensued between our bandmate and the driver, in which both men spoke into the electronic device and heard their words repeated back in the other language by some sort of genius multi-lingual robot. The conversation began with what we’d seen in Moscow that day, and ended with a joke concerning an invisible cabbage, and somehow, all was seemingly understood. The rest of us sat bright-eyed and open-mouthed in the back: most days, technology is at best perplexing and at worst infuriating; in this moment it was nothing short of astonishing. 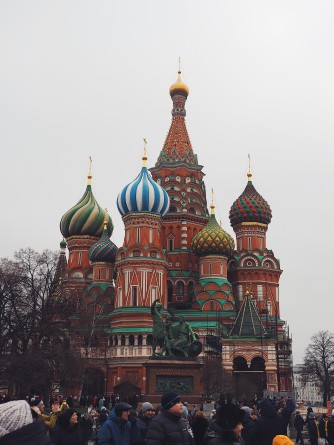 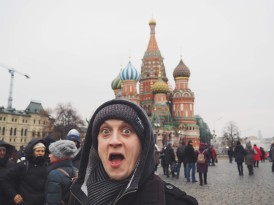 Someone’s excited to be eyeing up Moscow’s architecture

Moseying around Red Square and the outskirts of the Kremlin

The final day was brimming with borscht, vareniki (Russian dumplings), ushanka hats, shows with snowfall and… well, yes, if we’re doing all the cliches at once, vodka. We filled ourselves with all of the most warming food before the final shows – shows that included a TV appearance and more heartbreakingly beautiful crowds. At the end of the last performance I felt a pang of sadness as, despite my increasingly dry skin and completely numb and aching hands, I’d never known a crowd more appreciative and joyful to play for. Even the dark, gaping, icy artist portaloos, which we had to visit in a chilly catsuit several times a day, weren’t enough to put us off this gem of a gig. 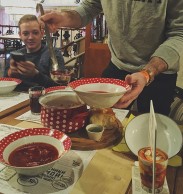 The ceremonial serving of the borscht

Upon arrival: I wonder if we’ll be eating beetroot and dill? 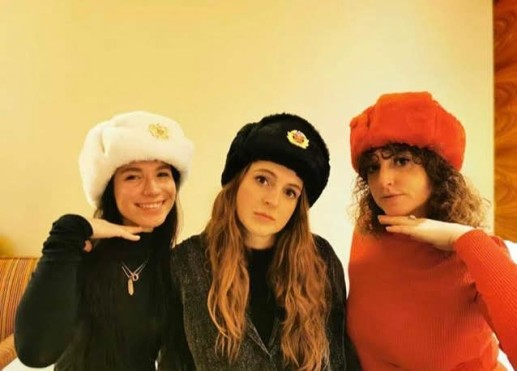 The night ended with a group of excitable drummers and their tiny gymnast friend playing pool and singing outrageous karaoke at a bar near the hotel. A friendly Russian man who was playing on a nearby table came over just to offer us a round of vodka shots, saying something to do with ‘duty’ and ‘tradition’. It went down alarmingly smoothly, without that burn in the back of your throat that we’ve come to expect from the likes of Smirnoff. Inside the karaoke bar at the back, we sang such favourites as Tatu, Boney-M and System Of A Down, while a few cheerful drunken locals chose songs in the Russian language that, according to our host, contained questionable propaganda. In any case, it seemed everyone was up for a dance and didn’t appear to notice our off-key shouting of somewhat obnoxious song choices. We took a moment outside to see the snow covering the lit-up Moscow streets, and a plastered man who’d just been kicked out of the karaoke bar staggered towards us: he mumbled something in Russian and then said in English, ‘Where are you from?’ We answered, and he responded with ‘I’m from Uzbekistan,’ and then continued muttering in Russian. For a moment we felt concern for the threatening insults he might be directing at us, and then we turned to Maria, who smiled and said, ‘He says… we are all neighbours… one world.’ 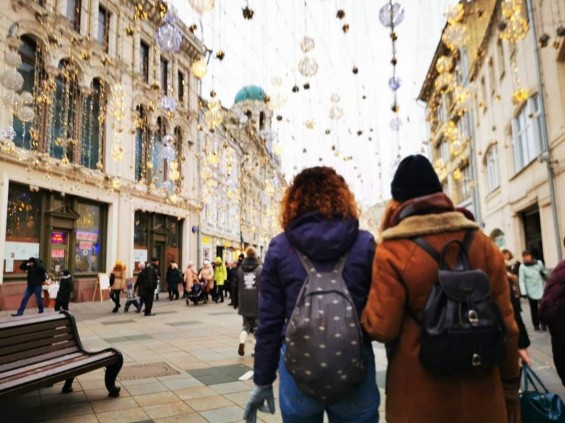