Anyone who woke up in Pula after a long journey would be forgiven for thinking they were somewhere else entirely. Every restaurant serves primarily pasta and pizza, locals say ‘ciao’ when they bid goodbye… oh, and there’s a great big Roman amphitheatre in the middle of town. Sitting just across the Adriatic Sea from Venice, Pula’s history of both Roman and Venetian influence shines through in its endless list of striking buildings and ancient ruins scattered all around the city.

On our first night in town we were taken to an Italian restaurant down a quaint street on the edge of a pretty square, and it was here, the client’s restaurant of choice, that we would eat our own bodyweight in pizza and pasta for lunch and dinner for the next four days. The wine wasn’t complementary, but seemed a worthwhile investment. Well, when in Rome… wait, where were we? At some point we asked if there was anywhere we would be able to try some typical Croatian food: ‘no,’ was the response, ‘this is the food here.’

The following day, we plunged into an ice-cold pool at the hotel and walked down to the comparatively warm sea. I stood in the clear water among the rocks, happily gazing across the harbour in the sunshine, blissfully unaware, while bandmates endured the garrulous promotional chatter of a dodgy dealer selling boat rides.

After more pizza at our new favourite restaurant – from staff who didn’t seem as pleased to be there as we were – followed by a site walkthrough and a few verging-on-obnoxious ballgames in the square, we ate some takeaway pizza (yes, really), and then began preparations for the evening’s mammoth parade gig. By the time we left our dressing room in the town hall and entered the square, this time in full costume, it was completely packed with expectant people. Visualia, Pula’s annual light festival is evidently a very popular event among both tourists and locals, and once we got the parade going it was near-impossible to shake off the crowd, even as we took a scheduled water break halfway through. The parade covered a fair distance, from the town centre to the seafront and back again, down shopping streets, through parks and various light installations, including kaleidoscope-like projections on Pula Cathedral and a crane light show in the harbour. With a touch of heatstroke and dehydration following one day in the sun – which we’d long-forgotten about back home – it was exhausting, but as always the crowd (and a sip of water) kept our energy levels high, and by the time we returned to the dressing room we were hyped and ready to play again. Alas, time to pack up, finish the pizza, crack open a beer and relax.

Over the following couple of days we: listened to the Alan Bennett-style ramblings of older holiday-makers and their accompanying flesh basking in the sun by the hotel pool; made the most of a nearby waterslide, ‘supervised’ by the most oblivious man in existence, who didn’t seem to notice four-person trains repeatedly descending into a pool of chaos; half-reluctantly swam and staggered around in the rocky sea among thousands of tiny jellyfish (fortunately non-stingers); and explored more of what Pula had to offer. This consisted of doing whatever we could for free: in other words, walking around the outside of numerous historical structures. The view of the city from the fort was worth the walk to the top, and gave us opportunity for an obligatory cannon photo shoot. 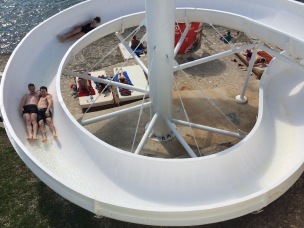 Responsible adulting on a waterslide

Saturday evening saw performances from the Lords of Lightning, another UK-based performance group, in the Pula Arena (the amphitheatre), finally granting us free entry to the city’s most impressive ancient site for a mind-boggling, electricity-mad show. Between watching shows we resided in the main square, quenching our thirst and observing runners in the annual 10K Night Run. As runners glided past us in our guilt-ridden drinking hats, we noticed a distinct lack of noise and support from other onlookers. Having recently been almost moved to tears by the heartening support shown by crowds watching the Great North Run, a well-renowned half-marathon in my home city, we couldn’t allow such apathy. So, for the next half-hour or so, we cheered, clapped, high-fived and provided a Mexican wave for every single runner who passed us. It soon got the rest of the crowd making more noise and doing much the same, and became a joyful experience for everyone involved. We’d like to think that in future years, the 10K Night Run in Pula will become known for its incredibly supportive crowds, all thanks to a few merry drummers who couldn’t stand to see people trying so hard with no glory. Well, when in Ro… Okay, enough of that. 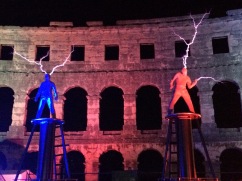 The Lords of Lightning

Other activities involved accidents with beach balls, all-night card games, and various band members being either held captive or pushed out of the hotel casino, the last place to close each night. We spent many taxi rides, with our incredibly calm and hospitable driver, attempting to learn the Croatian for phrases such as ‘Two beers please’ and ‘This gentleman will pay for everything’ – top of several lists of helpful suggestions according to the Croatian tourist board. How convenient.

If you’ve been following this correctly, you might have worked out that our only day of actual work was at the beginning of the trip. It seems the mosquitos and weather gods heard this, too, because by the time we left our glorious refuge by the sea my face was covered in karma-indulging swollen insect bites and, due to a sudden electric storm on the final day, our flight was delayed by four hours. Here proves that in everything exists some sense of balance. On the one hand, the sea was lovely and the jellyfish didn’t sting; on the other, I’ve returned home to rainy England with a sore, sad, red face. Well, when not in Rome, you can’t have everything.

2 thoughts on “Lights On, Eat Pizza: Parading Through Pula, Croatia”