The official tourism website for Latvia describes the country as ‘Flat in landscape, quiet in temper, cold in temperature and small in size.’ Except for the temperature, which right now (summer) is a great deal warmer than the -25 degrees it can apparently drop to in winter,  I couldn’t come up with a more fitting description after spending a single weekend in the small eastern city of Rēzekne.

We flew into Riga airport over stunning scenes of shimmering sea water, thick forest, numerous lakes and expansive, flat farmland, the red roofs of quaint wooden houses, spread far apart, hiding between the trees. We were greeted on arrival by our host – the perfect Northern European embodiment with his quiet nature and flash of white blond hair – who would become our good friend and team member no. 7 throughout our stay.

The following information may be best read and understood as a kind of dream sequence, in which all events happen in a seamless fashion that made sense at the time but, in telling it back, now appear rather surreal and at times contradictory, perhaps even unlikely. While the art of good storytelling often benefits from obscuring or exaggerating the truth as opposed to offering an accurate and impartial portrayal of facts, as far as I’m aware, this is a weekend in Latvia as it actually happened, or at least as it was for six clowning drummers from north-east England.

At first glance, the city of Rēzekne, located in the Latgale region just 63km west of the Latvian-Russian border, appeared to be something of a ghost town. Having driven four hours east from Riga, the capital which houses a third of the country’s population, Rēzekne looked like a small town peppered with modest clapper-board houses accompanied by beautiful vegetable patches, and absolutely no people. That was, until the festival began, but I’m getting ahead of myself.

In an attempt to explore the distinctly unbustling city centre before the gigs began, we headed down quiet roads past an assortment of charming churches towards the first hill we saw (one of seven in the region, though the whereabouts of the other six wasn’t immediately obvious) where there stood the Castle Ruins. Here, there stood a stone arch, the humble remains of a castle, at the top of the hill, perfectly framing a striking redbrick church in the city below. In a field beside the ruins we noticed an intriguing set-up taking place: various tents, neon flags and bizarre flying saucer-shaped objects began to appear as a few dreadlocked hippies prepared for some sort of rave. Moments later, after snapping a few shots of the Castle Ruins from various angles, we were ambushed by two terrifying six-year-olds with wooden swords, as if enacting a battle from medieval times. Brendan took the first hit, shortly followed by Adam, and soon the whole team was down on the ground pleading for mercy. But the youngsters refused to give in, and battle commenced for a good twenty minutes or so, while peaceful painters glanced disapprovingly over their easels and any parental adults remained blissfully unaware.

After being fought off the territory of two victorious six-year-olds, we descended towards the tourist gift shop and ogled woollen mittens, patterned winter socks and stuffed animals made from felt. Upon paying for one or two woolly luxuries we noticed by the window a strange hooded statue with no face, which prompted a local ghost story from the shop assistant, who told it with the utmost sincerity. Then, having lost half of our group following the Great Battle of Castle Hill, we wandered towards an intriguingly angular modern building nextdoor, which turned out to be hosting some sort of school concert to which our friends had already been personally invited. Shuffling into a crowded hall full of costumed kids and proud parents, we watched on in baffled fascination, at performances by classical guitarists, breakdancers, ballroom dancers, and everything in between. By the time certificates were being awarded, and we had eagerly applauded on ten or more occasions between Latvian speeches we had no chance of understanding, we decided it was time to leave and eat ice cream, which was conveniently served at a non-specific eatery nextdoor.

The evening brought three half-hour gigs of unexpectedly large proportions. Having been a drizzly ghost town by day, by night Rēzekne was transformed. Each gig got busier, and by the second night we were almost wondering where we would actually perform, as it seemed every inch of space around the main square and stage was taken. We still have no idea where all the people came from, but what we do know is that they seemed delighted to be there.

After some lively and incredibly enjoyable performances amongst the crowds, we packed up and headed back towards Castle Hill, where the afternoon’s preparations had culminated into a full-blown UFO rave. The DJ was spinning discs inside a transparent, neon inflatable flying saucer, while computerised psychedelic visuals danced above him on an elevated screen, and techno pumped loudly through a PA while ravers enjoyed dancing between smoke machines and neon rags and miniature solar systems hanging from the trees. We danced and danced as if we hadn’t just danced for hours in front of large crowds moments earlier, and then decided to take a chance on the ‘hipster kebab house’ down the road, which the Latvian organisers had promised would provide the night of our lives.

The hipster kebab house, it turned out, wasn’t just a kebab house but a bar that happened to serve fancy kebabs as well as beer, and hosted DJs that played all night long; it was also the location of the festival’s artist after-party. Here we met with other performers from Latvia, Russia, Spain and Argentina, and continued dancing non-stop until the sun came up and we could no longer ignore the daylight. Perhaps the most telling part of a good night of dancing is when the sound system breaks and the party continues. In fact, the point at which the music packed in for half an hour or so was probably the most entertaining part of the night, as the celebrations erupted into full song and dance, including a rap battle and dance-off led by Spanish breakdancers, followed by an improvised song about Rēzekne, and then a conga line that involved the entire population of the venue and led outside before ultimately descending into the Macarena. Meanwhile sound technicians anxiously attempted to uncover the root of the problem, yet we were so far past needing anything but our own voices that barely a soul in the bar seemed to have noticed there was a problem at all.

Leaving the bar giddy and woozy from dancing, having forgotten to try a kebab, and with a hundred new and temporary best friends, we wandered across the barren planes of the town, stopping by a deserted play park on the way to get childlike thrills from jumping off a roundabout and rocking on an inappropriately squeaky seesaw. The neighbourhoods were simple and clean, organised by straight, wide roads and green gardens with dilapidated sheds and perfect flowerbeds. We walked back to our hotel in the fresh air and the early morning sun, the sincere words of kind yet intense strangers still ringing in our ears. We walked along empty roads, alongside the pavement, recalling being kindly told off by sensible teenagers for that very thing earlier in the day.

The following day we downed the Emergency Muesli and left the hotel in the early afternoon to get lunch at the cultural centre known as ‘Gors’, which stood at the centre of the festival site. Though a grand and beautiful modern building with a wide range of event listings, the venue itself was not used for the festival except for providing meals and a dressing room for us, and was otherwise almost completely deserted throughout the weekend, except for the odd school trip and a wedding. Lunch, like dinner, consisted of some kind of meat, mashed potato or rice, and shredded cabbage and carrot. It was always hearty and delicious: exactly what performers need between energetic shows where you lose half your body weight in sweat. We took the time over each meal to discuss other meals we’d eaten in various parts of the world, the good and the bad, the extravagant to the shocking. We asked our Latvian friends if the food we were eating was ‘typically Latvian’, but it seemed nobody knew. Well, you can’t expect to learn everything in one weekend. 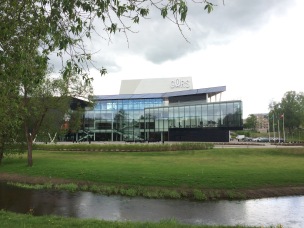 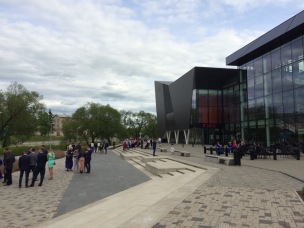 A wedding taking place outside our dressing room

Outside we were met with sunny weather and pleasant acoustic tones from the smaller stage by the river – the perfect antidote to the previous night’s escapades. Eating more ice cream, as holidaymakers do, we took a stroll by the river and eventually came across a huge lake, where novice wakeboarders splashed about in the freezing water and teams of twenty-somethings played volleyball in the sand. I took the opportunity to sprawl out on the grass and take a nap in the sunshine, being awoken at short intervals by the cries and whoops of watersports spectators as a wakeboarder took a particularly large jump, or as a sorry man took yet another fall in a Walking Water Ball that made him look like an especially clumsy, oversized hamster.

The gigs that night were more strenuous again, and the sheer volume of the crowd even more monstrous. For the final show, we went out into swarms of mosquitoes, drawn to the lights in our drums and sticking to our whited faces, and waited patiently behind the main stage while the previous act – an incredibly popular Russian female singer who appeared to attract fans of every generation – came to a finish. In a final trick I’ve never seen played out so smoothly, the band continued playing as the glamorous singer left the stage and flitted past us before stealthily getting into a gleaming white 4×4 with blacked out windows which promptly disappeared seconds later. No chance of an autograph, then. A minute or two later, the music on stage came to an end, and the singer was already nowhere to be seen.

Our own final performance was one of the most exciting we’ve played, with merry festival-goers dancing and jiving from every direction, and a few hilarious clowning moments with overly-keen punters who lingered a little too long in the performance space. Getting right up in the grinning faces of content party-goers was the perfect way to finish an exceptional weekend, and the subsequent reviews from various festival-goers in the following days became the icing on the cake. One happy punter aptly nicknamed our low surdo player ‘The Destroyer’, describing him as ‘scary at first’ but, as the performance progressed, came to see him as a friend, someone he could trust. The show’s narrative had never felt so pivotal, the reviews alone so far-fetched and entertaining.

The next morning we hopped back on a bus with all our gear, accompanied by a small number of the other artists we’d since danced and sung the night away with, and headed back down that long, straight road west towards Riga. After a few hours of chatting to Russian pop stars in between sporadic naps against drum cases, we dropped a couple of passengers off in Riga’s Old Town, making the rest of us envy their free time before flying home, which allowed them to explore what appeared to be a truly beautiful city. This, among many others, is a good reason to return to Latvia, and I sincerely hope that we do. 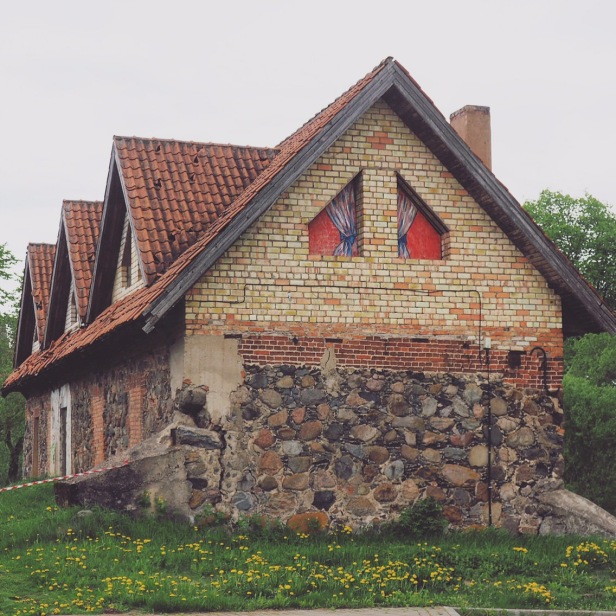