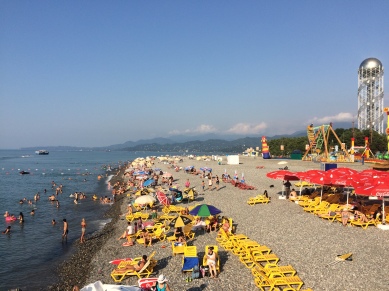 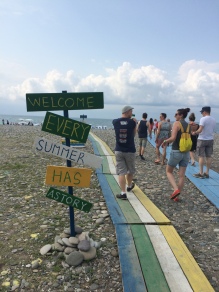 Whoever this Astory character is, I’d like to meet her.

With a few new fresh-faced drummers on board, our excitement was renewed: for one performer this was her first international gig with the group, and I found myself reminiscing not only about last year’s Georgian adventure but also about my first drumming trip abroad, to Macau (the one that got this whole writing thing started). While the regular trips might become more normalised, our job as performers is still the most exciting in the world, and even a trip back to the same place is always full of surprises. This year’s hotel was different, if only a few yards down the road, with the same startling view of the country’s most baffling skyscraper and what looks like a down-sized London Eye stuck to its side.

A familiar view from the pool 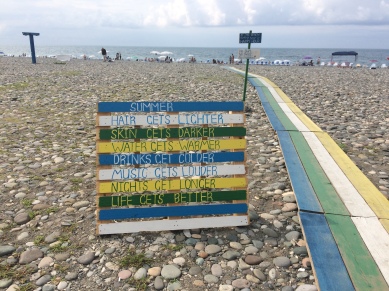 When we arrived we were met with the type of humidity the new recruits thought we could only be exaggerating, perhaps because it’s typically associated with tropical places like Bali or Trinidad, and something of a shock to the system in this part of the world. The gigs themselves were as tough as we remembered – hot, sweaty, exhausting – but exciting and truly fulfilling. The crowds were yet again fantastic, with their heartfelt dancing, keen clapping, engaging grins and loud cheers. And there’s nothing more satisfying after a long energetic work-out (well, gig) than a soaking catsuit dropping to the hard floor with an immense ‘PLAP’. By that point you know all the hard work was worthwhile.

Now, let’s get down to business: THE FOOD. Our mission to find a good lunch on the first day involved finding the first place that sold Adjaruli Katchapuri (the cheese boat – see earlier blog-post ‘Bringing Batumi Alive’) and ordering a round of beers to accompany our cheesy, bready feast. ‘Stodge Heaven’ might be the best way to describe it, and it was just as good as I remembered. If I thought it was in any way good for me, I would probably eat at least one every day. It turned out that nearly every eatery in town served this traditional meal, and even the tiniest people could be spotted confidently tucking into the mammoth stodge-fest. While this is typically served for one person alone, pizzas, on the other hand, are for sharing. Following our first evening of gigging we attempted to order six pizzas for a group of six people, and evoked a reaction of startled confusion from the waiter, who suggested we have just two between us. A waitress soon came over to help out with this over-zealous and complex order (six pizzas and six drinks, please), telling us that ‘Here, we do not eat a whole pizza like they do in Europe – our pizzas are much bigger so they are for sharing.’ After a few confused looks around the table about which continent we were therefore in, we made a compromise and ordered three pizzas. They arrived quickly and were undoubtedly delicious but, being the ravenous animals we are after a tiring gig, we realised soon enough that this did not quite satisfy our appetites, no matter how greedy the staff thought we might be. ‘Tomorrow, we’ll get four,’ we mischievously plotted in near-whispers so as not to be found out.

Tucking into a hearty lunch

Predictably, we returned to the first restaurant each day, and not only because of the cheese boats but also because of the friendly waiters, one of whom described our first meal as ‘the sea, a boat, and a piece of the sun in the middle’. What a charmer. So there we sat each lunchtime on the front terrace, next to perhaps the wildest crossroads in the world, where traffic lights and the demands of police seemed to mean absolutely nothing to any of the drivers. There was always something worth watching among the cacophony of horns, screeching brakes and wails of sirens among notably nonchalant pedestrians.

We found that the general attitudes of the public were shamelessly blasé, and this was perfectly summed up by the way nobody (except us) at the hotel pool seemed to notice the alarmingly eclectic playlist being hurled out of unnecessarily large subwoofers with erratic volume-changes and the most inappropriate lyrics for a daytime family crowd. From Cab Calloway singalongs to Georgian covers of Kylie’s ‘Can’t Get You Outta My Head’ and a few X-rated dance tracks, they had it all. The DJs were loving it, the Georgian guests, young and old, appeared indifferent, and all the while we sat there with mouths hanging wide open, unable to comprehend what kind of listenership the DJs imagined was there. This, coupled with the sounds of marching bands and rock covers groups echoing over from the seafront, provided endless entertainment and certainly kept us awake after we used up most of our energy on hyperactive ballgames in the pool. At the end of the day, there’s always a show to do, and every moment of sitting down without heavy drums attached is one to be cherished.

We played for around 90 minutes each night – sunburned, sweaty, and fighting off mosquitoes with our sticks – to an energetic crowd which somehow managed to keep up with us as we made our speedy stampede along the beach promenade. Each show ended with a swift game of pool or ping pong as we made our way back to the dressing room through outdoor leisure areas filled with families and holidaymakers. Perhaps this is the way in which we should end every show from now on.

Coming back to Georgia this year has made me realise how much more there is to discover: from the beach resorts on the Black Sea to the hiker’s mountainous paradise always in sight on the horizon, and far away on the other side, the capital, Tbilisi, where it seems half the people in Batumi actually come from. And if we needed any more reasons to return, perhaps next year they’ll be handing out free Georgian wine at the airport again. There’s only one way to find out.