Less than a month on from our Hong Kong shows, we’re in Taiwan for the Lantern Festival, continuing the Chinese New Year celebrations with more lights and even more giant monkeys. 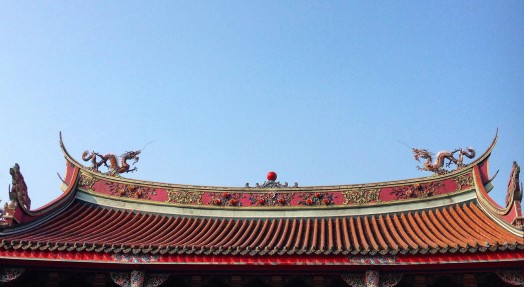 The gigs are as they always seem to be when we go to East Asia – huge. The stage feels like the size of a football pitch, and it takes a lengthy run just to reach the edge of the audience from where we’re performing, and then the crowd itself is enormous. People flock here every year in their thousands to see various performing groups, lanterns and, this year, a King-Kong-sized LED monkey that lights up in a tremendous psychedelic frenzy and bellows humorously in Mandarin across the crowd for five minutes every half hour for the entire evening. This includes a spot right in the middle of our hour-long show, when we stop and turn to the monkey to do its thing. After experiencing this surreal audio-visual extravaganza once, the second day’s performance feels surprisingly routine.

The first night’s show is fun but challenging. The second night we feel more relaxed and in-tune with our audience, who are a gleeful delight from start to finish, and show a great deal of gratitude towards us. Bizarrely polite heckles reach us from the crowd, with English phrases like ‘Welcome to Taiwan!’ and ‘Wonderful!’. A new piece we’ve added to the end of the set to gradually exit the stage is a particular hit, as we march all around the front of the audience to clave-based rhythms, high-fiving as we go. Then, it’s time for an abrupt end and another show from our monkey friend, the last of the night.

Walking down the street near our hotel in Taoyuan is like a glorious attack on the senses, as we encounter all of the sights, sounds and smells imaginable. Although there are plenty of apartment blocks, the buildings are not generally high-rise like in Hong Kong or contemporary China, but are comparatively modest, tiled and utilitarian-style, meaning your eyes are often diverted by all of the signs hanging off them, or the activity surrounding them, the buildings themselves fading into the background. (There are, of course, occasional Buddhist temples and shrines among these that, painted in bright red, green and gold, and with intricate dragon statues on the roof, never fail to draw one’s attention.) Almost everyone in Taiwan rides a moped, and this, coupled with the distinct lack of pavements on busy roads, puts you at a constant risk of being hit by one. Crossing the road is a wholly thrilling activity, filled with the uncertainty of whether or not you will reach the other side unscathed. Open shop fronts invite you into cluttered rooms that sell anything and everything, their shopkeepers passing the hours watching soap operas on widescreen televisions hidden between piles of items for sale. Neon lights, flashing signs, food smells, drain smells, barking dogs, rice paddies, mystery-meat restaurants, street vendors, queues for street food, night markets, day markets, food, food and more food… There is so much to take in at all times of day and night; I urge all street photographers to get here immediately. 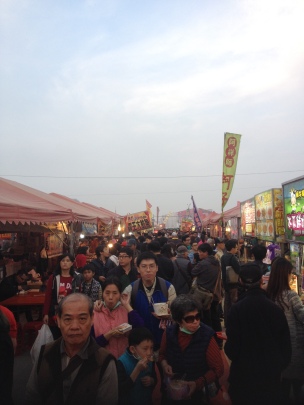 Food market at the Lantern Festival 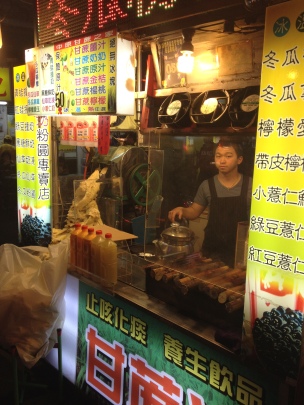 We fly home late on the final day, leaving enough time for a tourist day led by friends of friends who conveniently happen to live in Taipei. The day is completely awe-inspiring from the moment we go up Taipei 101 in the world’s fastest lift (reaching 60 kilometres per hour) and see the Taipei panorama, to watching the sun go down from Liberty Square outside the Chiang Kai-shek Memorial Hall.

The view from the top of Taipei 101, thus named for its number of storeys, is perhaps one of the most genuinely awesome things I’ve ever seen. We’re lucky to visit the tower on a relatively clear day, and at 390 metres high (as far as you can go up the 509-metre building) the city of Taipei seems to stretch further into the distance than one can see with the human eye, way off into the misty hills somewhere on a faraway horizon. Taipei 101 is one of few actual skyscrapers in Taiwan, hence nothing in the surrounding area even nearly competes for size and it feels as though you are in a plane looking down on an entire civilisation. My face freezes in a constant state of wonderment for the whole day. 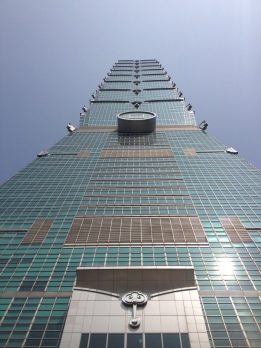 From bottom to top

This sublime experience is followed by a very cheap underground train ride and a wander towards Taipei Fish Market: perhaps the most up-market market I’ve ever come across. Bounding straight in towards the food (it’s lunchtime and we last ate almost five minutes ago) we at first pass a stall entirely devoted to wine and oysters, and then book a table at a beautiful restaurant where we can see fresh sea-life being cooked in front of our eyes. While we wait for a table to become available, we take a stroll through the market itself, passing an abundance of sushi, fresh fish and vegetables and the all the most glorious food smells. Then we pass into a large room filled with hundreds of crates of crabs, lobsters and other sad-looking sea creatures, having our hands sprayed with disinfectant as we enter, the idea being that we literally hand-pick our meal and inform them of how we would like it to be cooked before making our merry way home with hands and mouths full of fresh crab-meat. Instead we simply browse, find our way through another very posh market area full of huge, shiny vegetables, more fish and various other healthy, middle-class produce, and eventually make our way to our table at the restaurant. Here, we order as much fish, prawns, scallops, meat, rice cakes, vegetables and beer as we can manage, and sit and watch with glee as waiters arrive with a new plate of food every five minutes to add to our communal hotplates. It is food done to perfection. 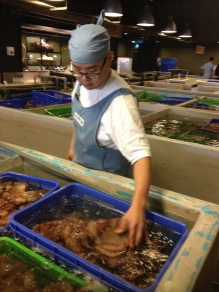 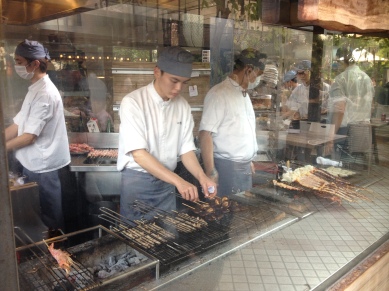 Delicious food preparation at the restaurant

The meal is walked off by a subsequent wander around Taipei’s bustling streets with a view to explore. Walking down unknown streets and getting (temporarily) lost is my favourite way to explore a city, and on our stroll we discover a whole host of new insights, some of which include:

After a coffee stop at a French-style café for the caffeine addicts among us, we find whole streets of trendy and bohemian shops selling beautiful clothes, natural soaps, yarns and gifts, and then, typically, we stop for more food. This time it’s dessert – mango shaved ice, a Taiwanese sweet delicacy: it’s incredibly cold but refreshing and tasty, something the warm weather (at least for us) calls for. Then it’s a walk to the Chiang Kai-shek Memorial Hall for a brief history lesson and to appreciate some traditional-style architecture and beautiful green open space. A moment of relative tranquillity. 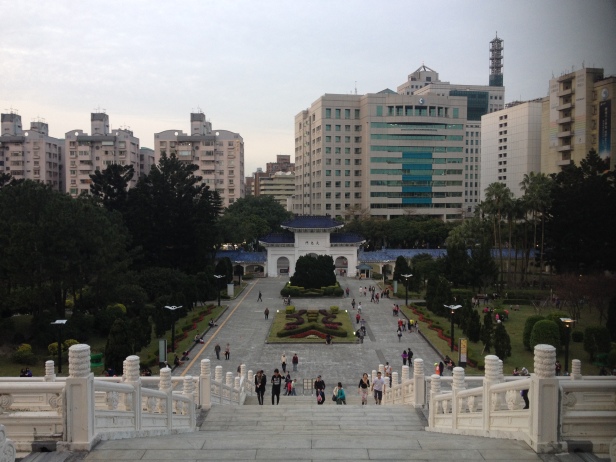 Here we are on an island less than half the size of Scotland with almost five times the population. Here on the other side of the world, 6000 miles from where we live out our ordinary everyday existence, there is so much going on. Every trip makes me realise how small the world is, yet how culturally rich and diverse every area and district is, and undoubtedly how fortunate we are to experience a taste of it all. This time it’s been short and sweet, but I strongly suspect we’ll be back for more. After all, we can’t miss out on seeing next year’s giant LED talking rooster.

2 thoughts on “Lights and Sights in Taiwan”