The best way to gain a better perspective of a place, is seems, is to visit more than once. It might seem an obvious point to make, but has become even more apparent to me now that I feel I was somewhat unfair on Dubai during my first visit in December. The corporate gig we played the first time, and the area in which we stayed, helped to confirm some of the expectations I already had. Below is a journal entry from our visit to Dubai a month earlier:

Future world of living machines; air-conditioned lives, lived out on the set of Blade Runner. No specific time nor place; no explicit evidence of history nor nature, but skyscrapers as far as the eye can see, rising up and up and further up into the desert skies. Pleasantly warm (in winter) with a desert breeze, and a flicker of a passing lizard, a reminder of being somewhere hot.

Few people walk, at least outside; but in the vast shopping malls that stretch far beyond the imagination, people move and bustle and stroll – no advertisement to be missed, with billboards the size of aircraft hangars scattered across the sandy landscape. The Burj Khalifa, currently the tallest building in the world, has perhaps the most impressive shopping mall on its ground floor, containing a huge aquarium between masses of the most expensive boutiques; but to get near the top in a lift costs a whopping 90 pounds, hence we gave it a miss.

Dubai feels very much like a transient town, with many people passing through… but only the rich. There is no poverty, no visible working class; only fast cars, sharp suits and shiny buildings. A meeting of cultures: English and Arabic written on every sign; burqas and mini-skirts worn side by side; western suits and traditional Islamic headwear; Islamic patterns carved into modern skyscrapers. So many languages spoken, cultures joined, yet somehow one doesn’t get the feeling that it is a place rich in culture. Money speaks loudest.

Some buildings have eyes: those of the UAE government – brave men with intimidating stares; pictures of power. And all is surrounded by masses of flags – red, green, white and black – in case you need to be reminded of where you are.

Friendly? Yes. Community? Less certain. Transient lifestyles and temporary money. Here and gone in seconds, like the trains that flash by between long, straight highways and the world’s tallest glass buildings. History? No. The future? No doubt.

A mosque along Sharjah waterfront

But returning to Dubai, staying somewhere different, and playing a large number of public shows to a huge variety of people up the road in Sharjah, gave me a different – or at least broader – perception of the Emirates. Perhaps this is due to our longer stay, our personal contact with more people, or a whole host of other possibilities. TIME – to meet, walk, see, experience – time to just be, is certainly helpful.

There is no doubt that Dubai (and Sharjah – the two are separated only by a single road toll, but otherwise roll seemlessly into one another) is an explicitly Capitalist metropolis; a fast-growing building site in the desert, developing quicker than humans can grow.

And it’s fair to say that a great deal of time for me was spent eyeing up the vast number of skyscrapers and the new structures appearing beside them, wondering how there could possibly be enough people to inhabit them all. On the outskirts of Dubai, certainly, there seem to be far more buildings than people. I guess walking around outside just isn’t the done thing, an activity that may well be stifled by the unbearably hot climate throughout half the year.

Yet in Sharjah, our day off allowed us hours of wandering, and the taxi driver who dropped us off in completely the wrong end of town actually became our hero. We walked by the waterfront to discover impressive water-fountain light shows, advertisements for music festivals, and masses of families having picnics and gatherings on the perfect lawns late into the evening. I had arrived in Dubai once again feeling there was a lack of life, but in Sharjah we found it, and it was as exciting as anywhere. 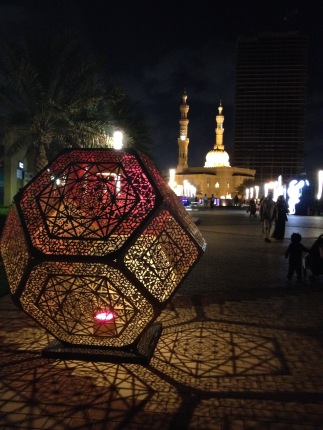 In the daytime, wandering the clean sandy streets, the rousing sound of the Call to Prayer surrounds you several times a day, projected from the beautiful mosques, a strange and stunning juxtaposition to the modern skyscrapers that surround them.

The gigs we played over the following days presented Sharjah at its best. Four shows each evening, every one packed with excitable people fighting for our attention. The first of each four was filled with our attempts at winning the audience over, and the next three were spent welcoming them back, along with their companions. For a nation in which alcohol is completely banned, I was surprised to find this was the maddest crowd I’ve ever encountered at our gigs. Kids were running amok while parents egged them on, encouraging them to hit our drums while we were playing, and to jump in, mid-show, to get a photo. One boy saw an opportunity to jump in front of the moving drummers to do press-ups on the ground, while other smaller children were nearly being hit by spinning drums at every turn. We were simultaneously exhilarated and terrified of the traumatic events that might occur with this level of excitement.

Luckily, nothing terrible did happen, and we went down a storm. One little girl, who spent the first few shows very close to us but always behind a gold smart phone, eventually put the phone down and became fully immersed. Her first comment directly to me, mid-show, was a very loud “I LIKE YOU”, and was later followed by “I LOVE YOU” at the end of our final show.

I also enjoyed winning over a very cocksure teenage boy in full Islamic dress, whose attempts to tease me throughout the show later turned to gestures of admiration. Even teenagers who deem themselves too cool for street theatre can cave.

The kids, in particular, were an absolute joy to entertain, as they got so thoroughly involved, having none of the inhibitions that hold most adults back, and not yet being tied in by cultural rules, traditions and gender roles. This is youth; enjoy it while it lasts, I thought. I’m lucky enough to be living out my youth far into my adulthood: on one level, because imagination and the arts have no boundaries; and on another, because I get to dress up in lyrca, sequins and clown white every day and gurn at people whilst prancing around playing the drums. 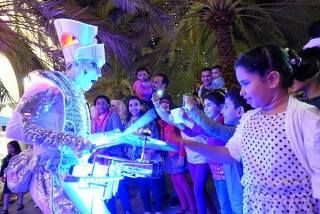 The good spirits of people didn’t end with the audience: our clients and hosts were remarkably hospitable throughout our stay. On our final day, our Indian host entered our dressing room in an England football shirt, proudly showing his support for his ‘English guests’ (us). The enthusiasm and friendliness of the people plus the incredible Lebanese food we ate each day were enough for us to have been happy doing another ten days of shows, but, despite the bitter cold back in the UK, I was excited to finally be returning home for more than a few days.