Following a few UK gigs and a very surreal and exciting TV appearance in May, June brought us to the Sibiu International Theatre Festival in Transylvania. On a very sweaty minibus, we saw a great deal of Romania, as we travelled from the capital Bucharest to the beautifully quaint city of Sibiu. I would say it was a cross-country route, but I’m not convinced there was an alternative. As we travelled for five hours across the country, we moved from views of flat dry fields and long aimless roads to luscious countryside and castles almost hidden in hillsides. Beautiful gardens, well-kept flower beds and impressive vegetable patches seemed to occupy the land of every picturesque and ramshackle house in the Transylvanian countryside.

This set us up nicely for our arrival in Sibiu which, with its picturesque old town, epitomises the quaint eeriness of Dracula. Saying this, I thought there to be a surprising lack of Dracula memorabilia in the city, though perhaps I was frequenting the wrong (or right) places. Most strikingly, many of the buildings have eyes (in reality, small windows in the attic roofs) which appear to watch you wherever you go; and the numerous cobbled streets and walkways such as the Liar’s Bridge – where it’s said that if you tell a lie the bridge will fall down – add to this sense of historic fairytale.

The people we met in Sibiu were incredibly friendly, and we were offered some of the best hospitality we’ve ever had by our local and international hosts. During our gigs, both in daylight and after dark, the crowds were some of the best we have ever witnessed, clapping along with every call-and-response, laughing with every joke, and cheering in every pause. No spirits could be dampened even when one woman took her enthusiasm a little too far and stroked the face and licked the hand of our boss in appreciation. The masses followed us through the streets with great enthusiasm and by the end of every show we really felt they’d ‘got it’: this show was made for crowds like this.

This energetic atmosphere remained the case late into the night, as we noticed when we sat down at a restaurant in the old town square at half past midnight, surrounded by other diners just ordering their starters. Keeping these late hours isn’t just good fun; it’s simply perfect for performers. 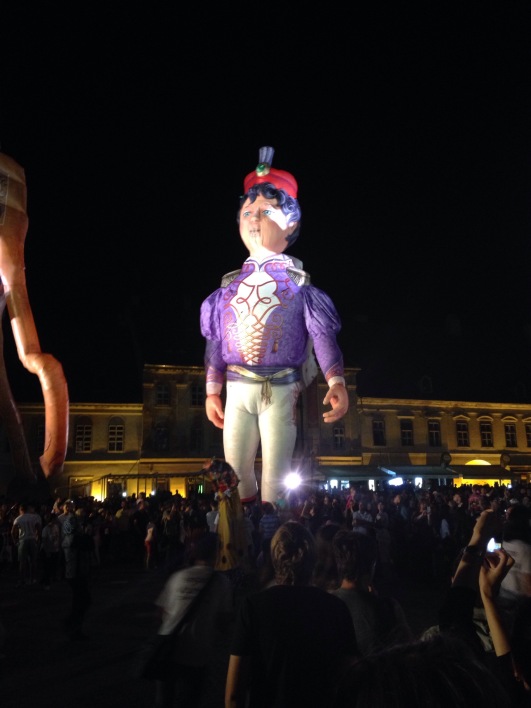 The weather, as expected, was hot, and sadly the onset of thunder storms on the second day meant that our final show was rained off. Fortunately the three shows we’d played beforehand were enough fun to keep us happy for a week, and with the help of a wonderful crowd and a perfect festival, they went incredibly well. Our host made us happily aware of this the moment she rushed into the dressing room after our first show, shouting ‘SIBIU LOVES YOU!’ Well, Sibiu, we love you, and I sure do hope we can come back for more in the years to come.