Since being back in the homeland and continuing the long line of gigs, I’ve reacclimatised to the unchanging comfort of Premier Inns and the many hotel receptionists straight out of I’m Alan Partridge. Macau now seems another world away (and, at times, felt that way even when we were there), yet returning to the north east of England was, in some ways, not so different. Indeed, people wear the same amount of clothing here despite it being around 15 degrees colder, and heavy drinking is just as popular. The main difference is that we no longer have to walk through the world’s largest casino in order to eat lunch (or breakfast, or dinner), and there are a few less dogs wearing shoes.

Memories of our day in Hong Kong are still vivid, making the buildings here in England look rather squat and the population small and sparse. I spent a good percentage of that day craning my neck, dodging traffic, and yet feeling somehow freer. Compared to Macau, Hong Kong seemed more real, and its contrasts were somehow less shocking: busy metropolis combined with green open space, rather than money and excess next door to abandon and decay. While these contrasts no doubt exist in both places, the comparative ‘shortage’ of casinos in Hong Kong seemed to set the two apart.

The mix of traditional Chinese with modern and Western influences was also evident everywhere in Hong Kong, and while one could expect to hear English conversations taking place almost everywhere, amist this one would also encounter Buddhist shrines, temples, and traditional food markets where not a word of English was spoken. Lanterns and dumplings on every corner, with Topshop just down the road. 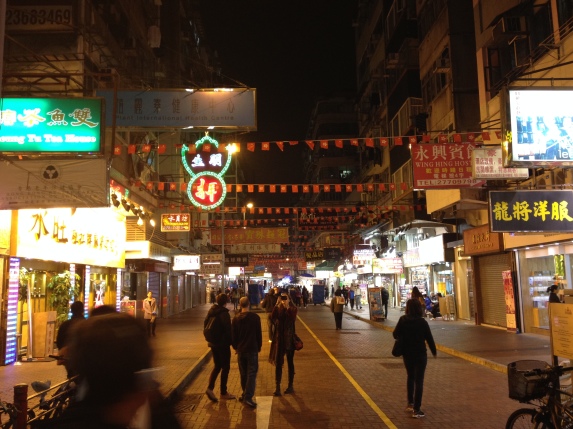 When we first arrived at Hong Kong airport, we were struck by the contradictory mix of attempted politeness and utter directness among some of the locals we met. A cleaner approached us at the underground stop, beginning in sweet tones with ‘Excuse me…’, only to follow this up with ‘MOVE?’. If only conversations in Britain were to progress this quickly, we might actually get things done. This sense of wellmeant forthrightness set the tone for much of our trip, and became an enjoyable part of all our interactions, whether for laughs or straightforward efficiency. Overall, it cannot be denied, we were treated incredibly well throughout our stay. 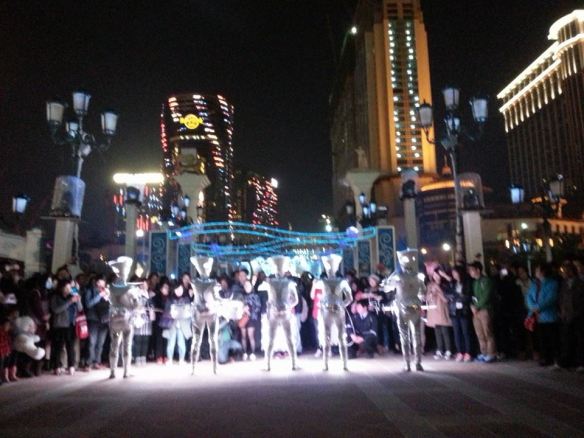 Next, we leave for Menton in the South of France for just a few days. Different to our Macanese experience, I’m sure it will be, but the most exciting thing about being a street performer, aside from the playing itself, is the number of surprises waiting for you when you reach your destination. France, I’m sure you won’t let us down.