22.12.14
Today I find myself in Macau, on the first of many international trips with my new all-dancing all-drumming workmates. Drumming, street theatre, sparkly costumes and startling light shows will occupy most of our time for the next two weeks, as it has done for me over the past few months. The difference this time is that it will all take place in a totally unfamiliar location, and extends over Christmas and New Year… in what is often referred to as the ‘Chinese Vegas’. Strange, it seems, sitting in Hong Kong airport listening to midi-style carols streaming unashamedly out of every wall and speaker. Christmas is here, it seems, wherever you are.

The boat to Macau takes just an hour directly from Hong Kong airport. A thick fog hanging over the skyline means nothing much of Hong Kong or Macau is to be seen during the boat ride. What appears at the other end is yet to be seen.

Pulling up outside The Venetian, a very large, expensive shopping centre/hotel/casino – and our performance venue for the next two weeks – we alight opposite a number of flashy skyscrapers and a huge neon sign that reads ‘City of Dreams’. It’s a little like something out of The Great Gatsby… as done by Baz Luhrmann… in Vegas… but also in China. Confused fascination ensues. 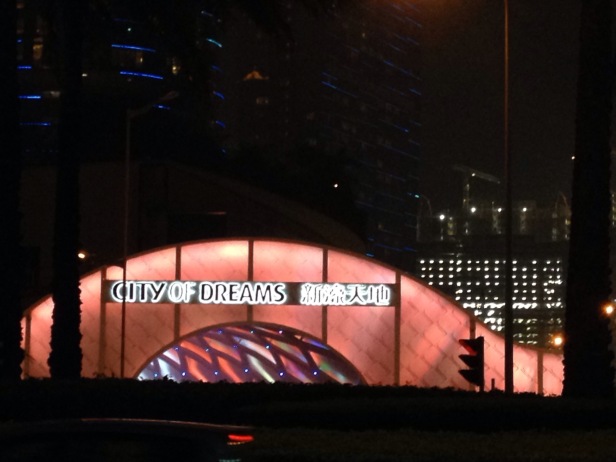 The Venetian itself is like something out of a Disney film, cartoon outlines included. Dazzling lights, fake snow and a host of Christmas-related street performers occupy the scene, set around a pedestrian bridge above a disused car park, otherwise meant to be the ‘lagoon’ (a substantial leak means all of the water has disappeared). 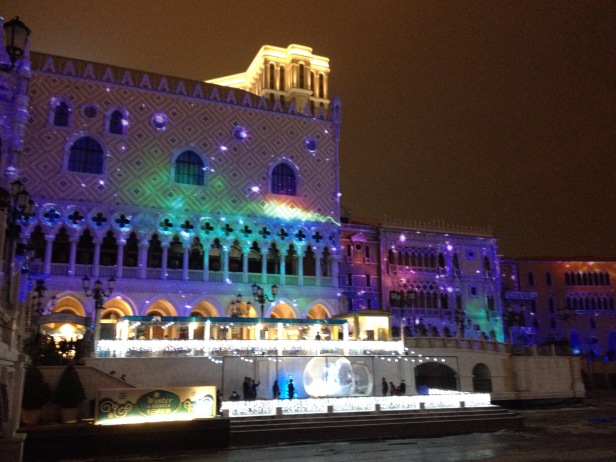 After a lot of unpacking and rebuilding of gear at the dressing room, we arrive at the hotel. Having the understanding that we would be staying in a Holiday Inn, the hotel comes as quite a surprise. Like the Venetian, which houses the largest casino in the world, gamblers gather at the – admittedly slightly smaller – casino on the hotel’s ground floor, and slot machines ring and ding at every entrance. The building is grand to say the least, with a marble-floored lobby that seems to be cleaned and polished by the same man all night long, only for thousands of people to tramp all over it again the following morning. This building is just one of the many massive skyscrapers, surrounded by huge casinos and gold-plated designer jewellery shops, and positioned right next door to the ‘City of Dreams,’ which it turns out is in fact another shopping centre. What a thing to dream of.

I’m beginning to think my experience of Christmas this year might be a little different from the usual.